Does not carry the chestnut colour gene!!

Verdi is a son of the world famous sires: Quidam de Revel x Landgraf I x Calypso I and Rigoletto. Father Quidam de Revel is a legend on his own. He has an impressive list of palmares and he himself participated in the Olympic Games and in the meantime he is the sire of a lot of international jumpers and approved stallions over the whole world. Grandsire Landgraf I is as famous as Quidam and has a long list of international jumpers and approved stallinons. Verdi descends from the famous Holsteiner damline 474-a. A motherline that produced the approved stallions Calato, Colombo, Carlino, Loxgraf Go, Montreal, Aldato, Nimrod, Cavalier and Cicero. Also the international jumpers Brillante, Spiga, Dehlia, Kira, Deka, Ishan and Edminton are from this famous motherline. Verdi’s dam Clarissa is a full sister to the mother of the Holsteiner stallion of the year, Calato!!

Verdi has a beautiful conformation and has very long lines, as well as very good movement, in walk, trot and canter. Also important is his very nice and easy character. Verdi is a tall stallion with a seize of 1.72 cm. who jumps with a lot of scoope and shows a lot of technique at the jump. Verdi has everything to become the jumper sire of the future, both because of his type and because of his jumping ability. At the performance test at Ermelo in 2005 Verdi was described as a stallion with a lot of scoope and a stallion with a lot of potential as a jumper. Verdi is approved for KWPN and the Holsteiner Studbook.

Verdi’s jumping capacity was assessed with a score of nine or higher in all the KWPN Stallion Competitions and he is the overall winner of his year with his rider Maykel van der Vleuten in 2006-2007. The first crop of foals by Verdi are big, long-lined foals with a lot of presence, they have a very good trot and a noticeably excellent canter. 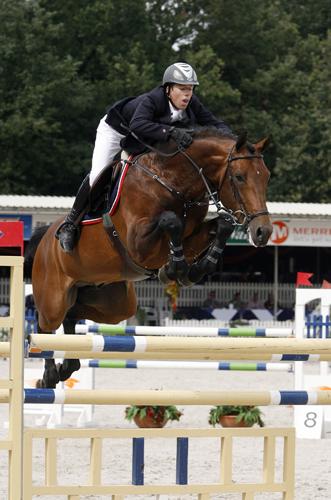