Douglas’s sires and grandsires have produced many top quality jumpers and stallions like Sapphire, Parco, Indoctro, Cassini, Roderik, Cardento, Landgraf and Lord.
Also the dam line brings the necessary jumping genes. This Holsteiner line 318D2 has also brought the stallions Corofino and Coriano, who both have jumped internationally. Three full brothers out of Douglas’s greatgrand dam are approved stallions: Lido, Leonardo and Lekar, last both did S-jumping. Lido was also an important sire and a famous Event horse.
Douglas did his stallion test in Adelheidsdorf as a 3 year old stallion and he became 1st in jumping with 139.49. Marks for the jumping portion were 10, 9.3, 9.3 and 9½.
As a 4 year old Douglas was the Champion of Ireland in his age group and he won the young horse jumping classes, four times! When he was 5, 6 and 7 years old he became a finalist at the Irish Championships. At 6 year old he became reserve Champion and as a 7 year old he won the first qualification and he placed 2nd twice, once a 3rd place and once a 5th, all of this at the Guidam League of Ireland. Douglas competed successfully in the international 1.40 and 1.50 classes with rider Conor Swail, he was 2nd and 4th in Dublin, 2nd in the B&R 1.40m Grand Prix, 3rd in the Dunlaoghaire 1.50 m Grand Prix and 6th in the Rolestown 1.40m Grand Prix.
Douglas has an unlimited scope and the best technique.
Douglas passes his jumping genes on to his offspring; Honeylands Douglasson won in Comperto a young horses class. Douglas Cavalier became Irish Champion of the 3 year old jumpers and in 7th place was an offspring of Douglas, the mare Bellevue Sheherazade. Douglas was the stallion who had the most offspring competing in the Irish Young jumper Championship. In the Championship for 5 year old jumpers three of his offspring were qualified, his daughter HHS Daisy placed 5th. In the final of the Championship of 6 year old jumpers two offspring were qualified and the highest placed was Crosstown Skylight, who placed 3rd. In the Championship for 4 year old jumpers Bobby Douglas placed 6th and in total four of his offspring were qualified. At the ‘Dublin Horse Show’ Douglas was the stallion with most offspring competing in the final of the 5 year old jumpers, three offspring were qualified and Warrentown Cruise was the highest placed at place 5. Evergreen placed 2nd at the Young Foal Show of Tolbert and D’Inzeo received the highest recognition and became approved at the Stallionapprovals of Zweibrucken. Two of his sons are selected for the KWPN Stallion test. They impressed the judges at the inspection with their scope, take-off and technique.
Douglas: stamps his own qualities 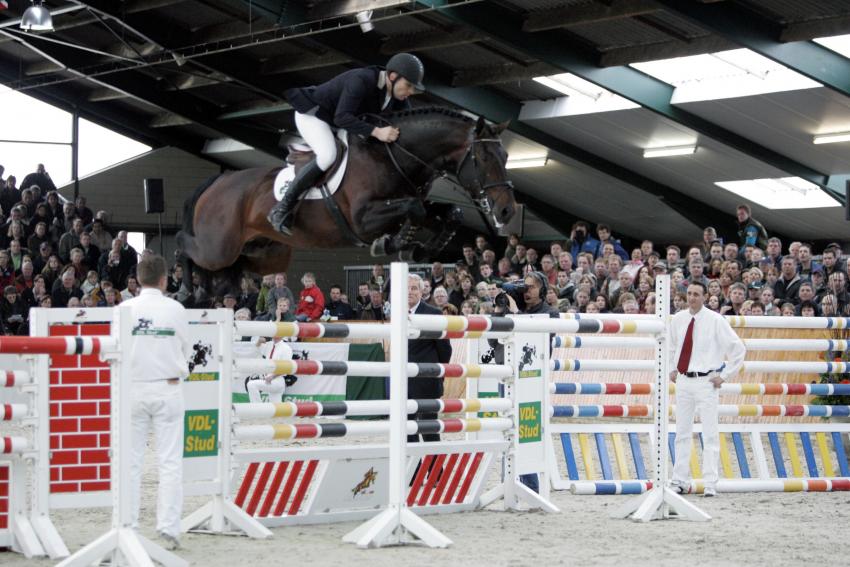 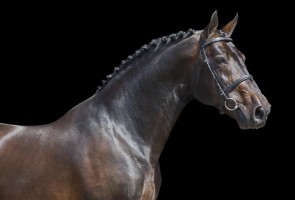 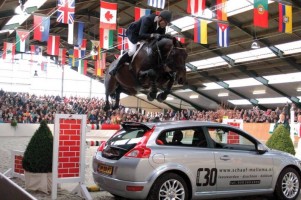