The Star at the Show Jumping Sky with the unique pedigree

Outstanding in scope with ideal technique, descending from a performance pedigree of absolute worldwide recognition – that´s how to describe Balou Star in a few words. In the type he is a noble and blood-marked athlete with a big heart, quick reflexes and a huge gallop with very large ground coverage. Due to his excellent technique, the high elasticity combined with great caution and a lots of scope, the stallion leaves a lasting impression on the jump.

In the season 2013 Balou Star was introduced by Hans-Dieter Dreher at International Youngster tours, including the International Youngster Cup at the 2013 Global Champions Tour in Wiesbaden. There in the final, he achieved the respectable 8th place as the second best German horse. Then he reached under Angelique Ruesen in Dortmund and Mannheim, and under Hartwig Rohde 1.45 to 1.50 m remarkable successes in Rastede and Elmlohe, as well. Because of these sporting achievements Balou Star received the full recognition as a stallion by the Oldenburg International Breeding Association (OS). Directly thereafter, he became recognized at Hannover.

Balou Star's two grand sire BALOUBET DU ROUET and QUICK STAR belong to the world's most desirable sires of our time. Both are sons of their common sire GALOUBET A, whose father is no less than the "Century Stallion" ALME Z!

In addition, Quick Star’s dam STELLA offers 3 times those extraordinary genes of the fabulous Arab thoroughbred stallion and exceptional performance sire DENOUSTE. His genes have been the absolute benchmark in European equestrian racing for decades. Furthermore, the dam line in the 3rd generation goes back to DOMINO, which represents the successful Hanoverian Schockemöhle show jumping blood.

Sire: BALOU DU ROUET is a world-class sire who, in 2016, ranked 7th in the WBFSH world ranking with a total of 51 licensed sons. His father Baloubet du Rouet was an exceptional athlete and under Rodrigo Pessoa triple World Cup winner and individual Olympic champion. Twice (by father and by mother) the unforgettable Almé son Galoubet A appears in the pedigree of Balou Star. The star sire Almé by IBRAHIM has virtually influenced all European warmblood breeds. Descendants of the Almé can be found at all international show jumping events and Olympic medal ranks. The dam line goes back to Domino in the 3rd generation, which represents the successful Hanoverian Schockemöhle show jumping blood.

Dam: QUENADA derives from the legendary Quick Star. This designated Meredith Michaels-Beerbaum as the most important horse of her career, as he helped her to international fame. Quote: “He was a phenomenon, an incredibly impressive appearance. He had springs under the hooves”.

The absolute peculiarity in the genetics of this amazing stallion BALOU STAR is thus the firm anchoring of the ALME Z - success genes both on the father, as well as on the mother side, as well as the appearance of the three (3) world-class stallions BALOUBET DU ROUET, QUICK STAR and DENOUSTE in a single insemination dose.

Balou Star is currently acting YR Team European Champion 2017. He has been based in England since November 2014 and he is highly successful in the international show jumping arena under his British rider Millie Allen, who is currently the most successful youth rider in Europe holding a total of eleven (11) FEI medals and being a member of the “British World Class Podium Potential Squad. Millie and Balou Star have so far won three (3) FEI medals at three (3) consecutive FEI YR European Championships and continued to excel into the 1.60m class, including outstanding achievements and recognition.

Balou Star refines his progenies, and the first foal years have produced numerous premium foals and several approved stallions. In Great Britain, Balou Star in 2014 presented the best show-jumping foal in the country, and he was awarded “Best Newcomer Show Jumping Stallion” in Great Britain. At the same time he presented the 8th best show-jumping foal in Switzerland.

His offspring present themselves quite active and leggy with lots of chic and great movement, a solid back and a long, well-muscled performance croup and excellent jumping technique, as well as the best interior. In the same manner of their father Balou Star, his offspring literally "seek" the fence. Balou Star is often used for the refinement of larger, muscular and well moving type mares with a lot of substance and scope as well as a height from 1.65m.

Balou Star refines, and he inherits predominantly in the height of the mares brought to him.

Balou Star - international showjumping sire of his own prime class! 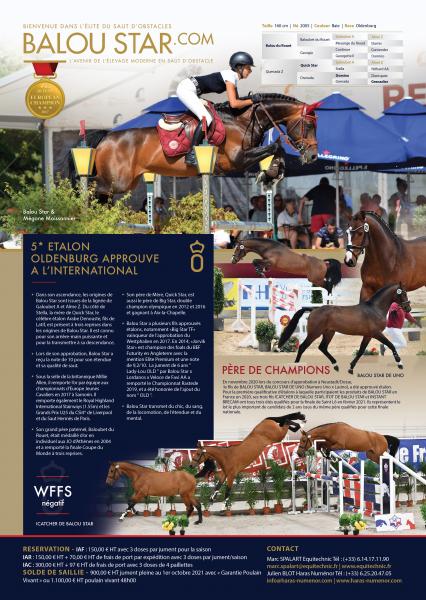 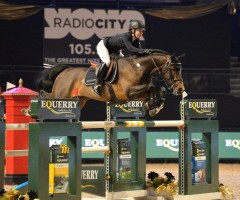 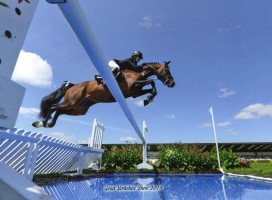 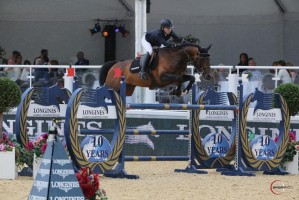